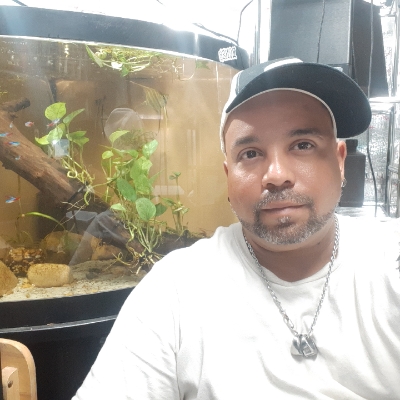 With the current political unrest in the United States concerning immigration, I could not help but draw a parallel line from invasive species and “Hoarding Immigrants” from the south. I was taking a walk through Turkey Creek Park in Plant city Florida. I was trying to get a feel for what types of species of ﬁsh would be in this big beautiful lake. My intentions were to scout out areas for a new YouTube video. I thought I would ask the local ﬁsherman what types of ﬁsh have they pulled up and have they came across any invasive species. I was surprised that the three different young men that I asked said “no” but when I rattled off a list of species that I was looking for they would stop at the Oscar ﬁsh and say, “Oh Oscar’s! Yeah there are plenty of those in here.” At ﬁrst I was amused that these young native Floridians didn’t know that Oscar ﬁsh are not native to Florida.

Locals from the area.

But as I walked further I could not get my mind off of the three identical scenarios concerning that question. You see, these young men grew up catching Oscar ﬁsh since they could cast a line. To their knowledge, Oscars are as normal to them as Bass are in Florida line waters. As for me, I am not a writer. In fact I am a ﬁshtuber that recently migrated to Florida myself. Being a ﬁshtuber, I watch a lot of YOUTUBE. One of my favorite YouTube channels is “Wild Fish Tanks.” Ryan the host of the channel and Floridian has begun to do a lot of videos highlighting Florida native and invasive ﬁsh species. As I watch his videos I can’t help but be fascinated that a lot of these invasive species have a healthy and long-standing colonies living in harmony alongside native ﬁsh, at least for now. What that tells me is that Mother Nature seems to be trying to ﬁx the problem of invasive species that we created, but she doesn’t seem to be ﬁxing the problem the way we want her to or as fast as we demand. She seems to be doing her own thing regardless of how much money we throw at the issue or how many times we hash tag the newest catchphrase. Since life began on this planet living creatures have migrated to new areas. Some in search for food and water. Some in search of a safe place without predators. Some ﬂed from or traveled to new areas because of climate change or a sudden meteor slamming into the planet. Not to mention animals being trapped on continents moving closer and farther away from each other on shifting tectonic plates. In recent years the major cause of animal migration whether it be directly or indirectly is without a doubt, mans interference. For whatever reason these animals have been moving from one place to another. Settling and claiming new territories as their own. Often at the expense of the original inhabitants. Mother Nature seems to have a strict rule when it comes to territory. Be stronger and faster. If not, adapt. If you can’t adapt then run. If you can’t run then go extinct. Man has a diﬃcult time remembering these rules in regards to our pets and how we dispose of unwanted ﬁsh. We continuously and carelessly release ﬁsh in the closest body of water. Then when that environment is forced to live under the rigid rules Mother Nature has set for us we decide as a society that something must be done. Oftentimes trying to circumvent Mother Nature’s law so these solutions are met with disastrous results making the problem worse. Let me play devil’s advocate for a moment. What if we do nothing? We allow Mother Nature’s rule to run its course. I would be the ﬁrst one to agree that it would drastically change the lakes and rivers as we know it. And because of the sped up time frame of it all there will be many bumps in the road in regards to the other Wildlife that depends on it. But, as I stated earlier, animals have been migrating from place to place on their own for hundreds of thousands of years. Also climate change, while I agree is drastically sped up by man’s intervention, its an inevitable natural phenomenon. So with a warmer northern hemisphere who’s to say that Oscar ﬁsh and other predatory cichlids wouldn’t have made their way North overtime on their own?
Really, what would happen to our artiﬁcial lifestyle if that natural lake at the park that we seldom visit, but often trash, and at one time had Minnows, Perch, and Bass in it, that now has Mollies, Convicts and Oscars instead? Let me be clear, I am not advocating releasing exotic ﬁsh into our natural waters all willy-nilly. In fact, I believe many species of exotic ﬁsh should have to be registered and the owners be licensed in some cases. But we can not be naive. With the economic advantages that Florida gains from a booming pet trade, the practice of importing and farming exotic ﬁsh will continue regardless of the environmental impact. Here’s the kicker. We have created a problem with no realistic solutions. The one guaranteed solution of letting mother nature ﬁx our screw-ups the way she sees ﬁt we are incapable of allowing. So on one hand we interfere with Mother Nature’s natural order by introducing ﬁsh into our waterways. On the other hand we interfere with Mother Nature’s natural law of survival of the ﬁttest. We continuously change our environment but refused to accept the changes we created. So I ask you again. What would be the harm in doing nothing? It can’t be any worse than what we have done already. Would it really be so bad to have a North American Oscar? Or a Mississippi Green Terror? Is it only predatory ﬁsh that we have a problem with? Would we be okay with California Tetras?